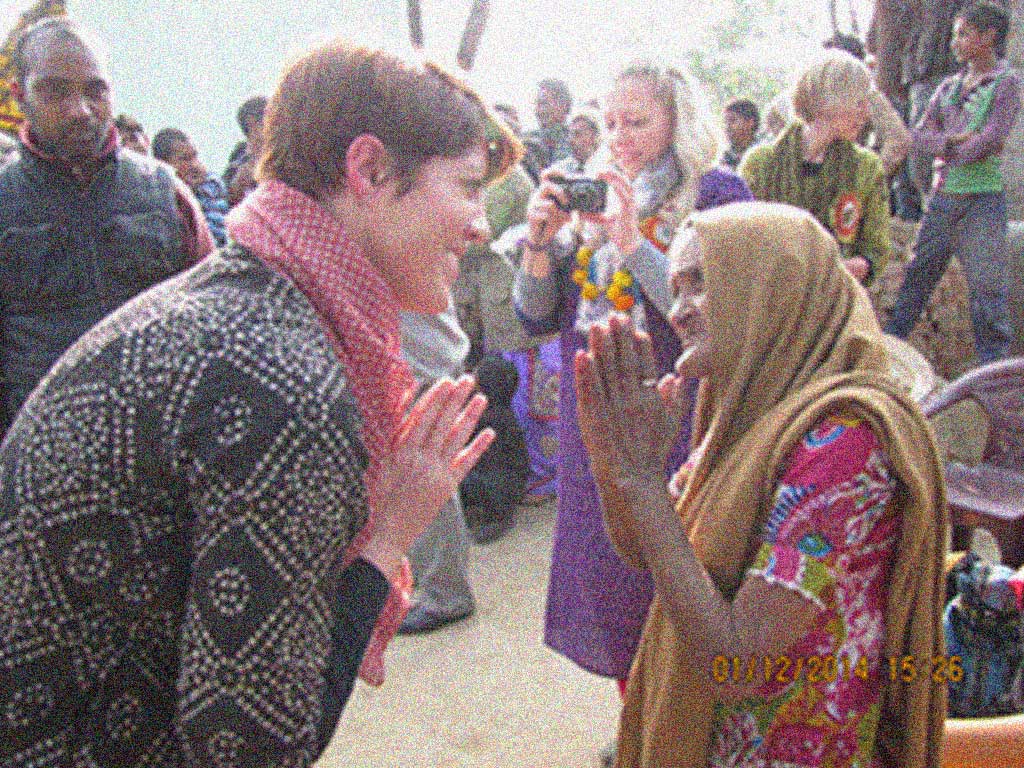 A reflection by Tristen Mejias-Thompson.

When I first decided to come intern for Truthseekers, I really had no idea what I was doing. I knew I would be working in India, and that it was Christian…I knew I would be writing stories for them, though I didn’t exactly know what it would entail. I knew Sunil was influential, but I didn’t really understand the pervasiveness of caste, nor how they intended to fight it, nor even how Jesus played into the whole thing.

Now, three weeks after first arriving, I still don’t know exactly what Truthseekers does. What I do know is that they are making a difference in peoples lives. More than that, though, is the enormity of the battle they are waging. Truly it is revolutionary, and to be surrounded by the incredible people that work here is quite the experience. The cause is so multifaceted that I am still wrapping my mind around it, but my own experience traveling with one of the leaders here may suffice to show how the power of God is present in this movement.

I had just arrived a week ago, and was still getting over my jetlag when my roommate and colleague Mark Nishane asked me if I would like to go with him to “Sudsun.” He described is as sort of a bible study, and I wasn’t busy, so I said yes without much thought.

We left at noon, after having eaten lunch, and I just followed him out of the office. We walked for a long time, me with heavy backpack burdened with laptop and books. I was sweating slightly when we arrived at a bus stop, and so I sat down on the grimy bench and began to read. In an attempt to learn more about the underlying problem of caste in India, I had picked up “Annihilation of Caste.” This book is a collection of Dr. Ambedkar (father of Indian constitution and untouchable) and Gandhi’s speeches, introduced by modern author Arundhati Roy. Suffice it to say, I felt very sophisticated and self-important as I sat in India reading about her problems, having even the arrogance to wear my Harvard shirt. Far from the average rich American, I was here to help these people, and I felt entitled to recognition of that fact. People did look at me, and I pretended not to notice.

After about twenty minutes of waiting, we caught the bus to a place about half an hour away. From there we took an auto-rickshaw, another fifteen minutes. At this point I was becoming slightly impatient, tired of sweating and public transportation.

Then we arrived. My head was on a swivel, taking in the drastic transformation from the city of New Delhi to the outskirts. While urban Delhi is a veritable concrete jungle, with twisted wire-vines, ramshackle buildings of varying heights, and muddy, sometimes cobbled streets, the place that we had traveled to was practically a village. There were still buildings everywhere, but it all looked worn and dirty, no building reaching above a second story and most looking fairly decrepit. In lieu of a proper drainage system, there were canals on the side of the road, and the stench was somewhat overwhelming. Cows wandered freely, and flies landed on every open surface. The heat was worse here somehow, but I trudged on after Mark. He bought a water for me, and I dutifully followed him, admittedly primarily concerned with not stepping in anything.

Soon we came to this small shop stand, one of thousands in Delhi. They are all similar, selling small brightly colored packets of tobacco and various salty snacks, and all of them taking up no more room than a standard broom closet. There is a counter, and then a four feet by six “store room” where the owner sits. I was gestured inside. Shelves lined the space, with one small chair in the back and three children sitting on the floor. The owner came out behind the stand and let me through, and I took off my bulky bag and stuffed it under the chair and sat down. It was strangely cool, with a small fan blowing and the shade bringing the temperature to a manageable level. I stuffed the bag under the chair, suddenly very conscious of my unnecessary belongings and pretentious shirt.

It is only when positioned thus that one learns how uncomfortable kindness can be. Soon enough, a woman came in. Then two. A few more children. By the time everyone had arrived, I was in a dreadful position. Seated still in that singular chair, I was raised above the fifteen people sitting on the floor, all knees together and sitting on laps. My friend, who was supposed to be speaking, was crouched on a stool. The shop owner was standing outside his own store and looking in.

And then, with much awkward shuffling and shifting of position, they passed out some weathered Hindi hymn books and started to sing.

From a choral standpoint, it was rough. Some of the kids were too quiet, some of the women refused to sing, and everyone was going from a different rhythm.

From a Godly standpoint, it was magical. These people, these sixteen souls in a crowded broom closet, were praising Him. They had an abundance of faith while having a shortage of money. Despite the improvisational feel to the whole thing, the utter lack of production quality, and the shortage of “stringed instruments” (Psalm 150:4), I believe it was more spiritually significant than an entire megachurch of fervent worshippers.

I sat there through that service, that Sudsun. I sat there while Mark spoke to them in Hindi, while they all discussed the bible, and I laughed inwardly when the kids started to drift off, bored by the specifics of scripture. These are the things that transcend language.

Though the children and I were unified in a lack of understanding, the adults gazed on with an impassioned urgency. In them God’s word was truly alive, truly a force that shaped life and gave power. They eagerly drank in his words, this being a highlight of their week.

Upon learning that I was a writer, the shopkeeper was very excited. Timid and prideful at the same time, he got out a notebook with brown and curled edges, pages covered in smears and stains and earnest writing. He read to me, line by line while Mark translated, a poem he had written. “I will not die a Hindu,” he began, and through all of the lowly details surrounding the reading, despite the venue, the language barrier, the awkwardness of the whole situation, it was powerful. His voice had conviction, his words had truth, and through him I saw in some small and meaningful way the work that Truthseekers is doing.

This one small side project, one of dozens here, was changing peoples lives. An orphanage can provide a home, disaster relief aid can help people survive, but Truthseekers gives Life. I have yet to truly appreciate the larger picture, but for now its enough to know that sixteen souls were eager to have to privilege of gathering in a dirty, uncomfortable closet, as long as it meant learning more about God.