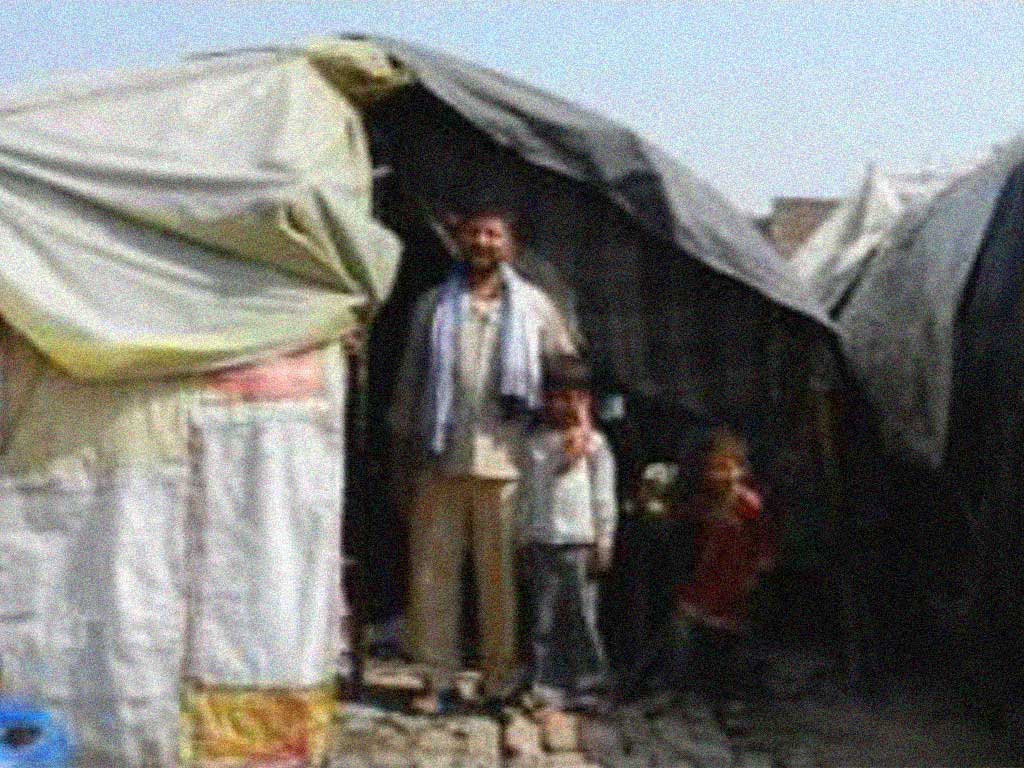 Deshpande is a partner in the Gospel in New Delhi. He started a school in a slum in Delhi and has managed it for over a decade. The school is for Banjaras. Banjaras are a nomadic tribe in India very similar to the Roma or Gypsies of Europe. They are seen as thieves and pickpockets and aren’t trusted by their neighbors. Those who earn money through legitimate means do so by selling peanuts, books, water, or coconuts on the roads to drivers at red lights. They all lost their income from the lockdown.

One of our former students was in Rajasthan with all his family except his father when the lockdown began. His father was in Delhi selling things on the roads. The lockdown meant he couldn’t sell anything, so he spent three days walking to Rajasthan to reach his family. They all sleep on the streets there. The former student can bank on his phone, so we were able to send them some money for food. In the attached PDF, there is a picture of the men of his family with their beds laid out on the road.

During the lockdown, we gave some money to one of our teachers and she went to the school and opened the doors. One by one she called the mothers of the students to the school and gave them enough money for a month’s supply of food. She cried when she shared her stories with us because she felt like she had actually saved some of their lives. There are stories in India of families getting so desperate that they turn to suicide rather than starve to death, and some of the mothers felt that same desperation.

Shankar is a cobbler that sat outside our office everyday cleaning and repairing shoes. He became good friends with our staff through daily interaction. He died of a heart attack during the lockdown. It was illegal for him to sit outside and manage his cobbler station, so he lost his job during the lockdown and the stress must have got to him. We gave three month’s wages to his family to help them during this time. Because of the lockdown, only five members of his family were able to attend his funeral.

My wife, Dimple, was born an Indian Hindu from an Untouchable caste. Her family came to Jesus through a traumatic encounter with an evil spirit that cost Dimple’s sister her life. The family came to worship at our church, which is how we met and eventually got married. Dimple and her family focused their ministry efforts on their friends, relatives, and neighbors, and a few hundred people have made decisions for Jesus. Although many fell away over the years, we are still discipling believers in her community. The area she’s from is called a “colony,” which means there is poverty, alcoholism, lawlessness, and illiteracy. Most families live in one or two room flats and there can be 10 flats in a single building. The buildings are contiguous, and streets are narrow. The men of Dimple’s community make flip flop sandals and earn very little money. During the lockdown their places of employment were shut, and they were left without any income. Their situation was grave, but our disciples were able to get out among the people who they had been sharing the Gospel to in order to give enough money for a month’s supply of food. Positive cases of COVID-19 sprang up early in the community, and now it is a containment zone where the police actively prevent all foot traffic in and out and new buildings are being quarantined as new cases arise. As I’m sending this (May 31), one of our disciples and her mother say they have a fever. They haven’t been tested for COVID-19 yet. One of our former disciples and her entire family have contracted the coronavirus.

This girl is named Dominee. She accepted Jesus years ago but abruptly returned her Bible to us without explanation and didn’t want to follow Jesus anymore (we suspect outside
threats, which is common). She and her entire family now have COVID-19. Her grandmother has been admitted to the hospital, but the rest of the family must stay home. The doctors say they will admit them later but haven’t done so yet. We gave some money for food, but they can’t even use it now and depend on the government to deliver essentials. We keep in contact with them over phone.

This woman is a relative of Dimple. She scours rubbish heaps in search of copper, iron, and anything else she can sell as her daily work. When she went out for work on the first day of lockdown the police beat her and sent her back home empty handed. She came from across Delhi to reach Dimple’s parent’s house to receive money.

The Indian woman smiling in this picture in Sangita. She was an early disciple of Dimple’s that became a committed evangelist. The American next to her is a missionary that came to teach house church planting techniques, and the children are Sangita’s. Her money was running out during the lockdown and she felt her desperation increasing. We gave her some money and her family praised God.

This picture is of Jyoti, our disciple who currently has a fever but we don’t know if it’s COVID-19 or not yet. We gave her family money when the lockdown began. We’re sharing this to ask you to pray for their safety.

So far, we’ve helped 43 families in this area. Many families were borrowing money to live. The government occasionally provided a single meal, and except for that meal some families went without anything. They couldn’t even make tea, and most Indians would starve before they gave up their tea. We’re attaching a few photos of some of the families we helped so you can get an idea of what they look like.

Ramesh Kumar is a Christian from Uttarakhand that now lives in Rampur, Uttar Pradesh. Uttar Pradesh is the most populous and one of the most unevangelized states in India. It is currently a stronghold of Hindu fundamentalism. Ramesh has been working with Maranatha Vision Centre in Rampur to change that. Every time he visits New Delhi he comes to our office for prayer, encouragement, and to share stories. He is our partner in the Gospel.

When India went into lockdown, millions of poor wage earners lost their jobs. With no savings, their lives were in danger and many have died. It’s very common in India for men to leave their rural villages and go to major cities for work. Once they lost their jobs, they all started migrating back to their villages. A large number of such workers came from villages in Bihar, one of India’s poorest states, and worked in Delhi. When they left Delhi to return to Bihar, they travelled through Rampur, Uttar Pradesh. Therefore, Ramesh was on a popular route for many of these starving migrants.

He sets up a small kitchen outside in temperatures over 100 degrees and feeds an average of 2000 migrants a day as they travel through Rampur returning to their homes. These migrants, mostly being from Bihar, are among the poorest and worst suffering of all the people in India from the lockdown. It’s been a tremendous joy of ours to see Ramesh’s work in his city and to partner with him in serving the suffering and spreading the Gospel. He distributes Gospel tracts with the food.

Vijay has been our partner in Bihar for several years and has overseen a successful ministry in his area. He was formerly an idol carver who saw Jesus in a vision after hearing the Gospel from us. He was tremendously popular as an evangelist. He had a gift for opening villages up for the Gospel that were formerly closed to it. The men in his villages are construction workers, delivery men, auto rickshaw drivers, and day laborers. They all lost their jobs and income during India’s lockdown. He decided the best way to distribute relief in his area was mass distribution of small amounts of food, rather than the gifting of a month’s supply of food to a smaller number of families. In a network of communities like his, it would be impossible to help some families and not others. Therefore, he distributed bags of rice to over 400 families and he cooked a single meal to feed everyone from those families in a large dinner on May 24.

The men of Vijay’s village lined up to take food. They don’t know about social distancing or masks.